Tacx Neo has been the choice of many a Zwift user over the past few years and the quietness and quality build have been the benchmark of High-end Smart Trainers but not anymore, as it new little sister is about to land in the UK.

The aptly named “Neo 2” is the new generation of Smart trainers with the ability to accept future updates from Zwift which are already in production, the Neo 2 is set to rock the world of Smart Trainers with it’s new features which now also include pedalling dynamics.

Pedalling dynamics will take power readings from each pedal stroke much like the Garmin Vector 3 Pedal system, which will add a whole new dynamic to your indoor training needs.  The Neo 2 will also benefit from a smoother more responsive control system which will be faster acting when hitting the gradients in Zwift and other training software’s.

Tacx have also redesigned the casing adding a nice Tacx blue to the case and reducing sound even further than the previous Neo model.  Axle compatibility has also increased with the ever-increasing range of axle fittings.

Pre- Orders placed up until the 1st drop will also benefit from 6 Months Free Zwift Vouchers allowing you to train to your hearts content throughout this winter. 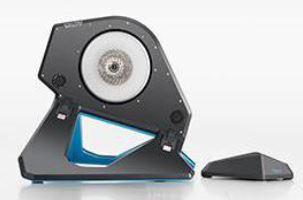